I live in a rental community in Montclair, NJ. The neighborhood buts up against a regional university and has lots of great amenities, except community gardens.

Last winter, when looking for a new place, community gardening space was one of my criteria. I was both surprised and disappointed at how scare they are here in the "Garden State" I was able to secure several planting boxes on the property for use in gardening.

When I started the boxes had been well neglected and were covered in weeds. 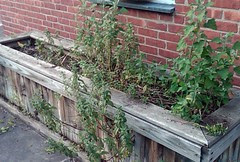 Upon closer examination, I noticed that the "weeds" were in fact mint plants. An overabundance of mint plants. 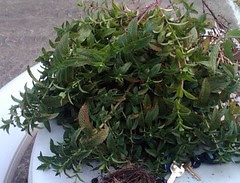 Mint is a weed with invasive roots...trust me when I tell you...more info on the mint on a later post.
Step 2: Condition soil.

A combination of new potting soil, hummus and nutrients were added to the dirt and mixed well. Did I mention it was approaching 90 degrees outside with crazy humidity? 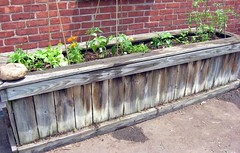 I am also trying a new-to-me support system this year the garden teepee. I built mine with lengths of bamboo from the local hardware store. I will train the plants to climb up them. I've set-up a (several times a week) watering system...so now it's time for mother nature (and some organic fertilizer) to do her thing.