Quilts for Vyo and KiKi

When I lived in Boston...I became friends with a lovely family. The Nundlall's. The patriarch was also a grad student at Brandeis in the Economics Department. Despite being a dyed in-the-wool capitalist, we became fast friends. On occasions I would sit their two children: Vyo and Kiki.

These two are precocious boys that love dinosaurs. I mean LOVE dinosaurs. They can tell you the difference between a triceratops and an iguanodon including the age in which they lived. Additionally, they are from a tiny island nation east of Madagascar name Mauritius. Since I hadnt seen them in years and was not able to see them off to England when they left the states, I felt compelled to make them quilts.

I started by trying to pick fabrics. Since their roots are in a tropical nation and they loved dinosaurs I started my design with 2 packs of Hoffman Bali Pops in the Mint Chip colorway. Bali Pops are basically jelly rolls of batik fabric. The colors were rich and reminded me of them. 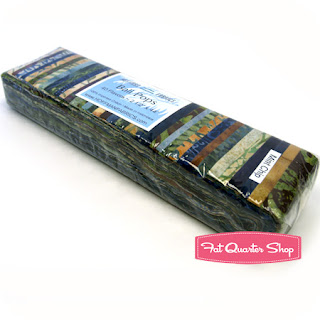 Now don't be confused, just because their interests are similar, these are two very different boys. Vyo is very orderly and logical while his brother Kiki is 100% pure energy. So I decided to use similar fabrics to create 2 differently unique quilts.

For oldest brother Vyo, I made a nine-patch quilt with no sashing. I surrounded the patches with mitered cornered batik borders (creme and navy) and backed in a blue batik. 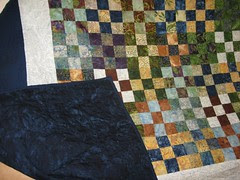 For Kiki, I challenged myself to produce a quilt without a pattern. This proved to be most challenging. I did not realize how attached to patterns that I had become. There was more ripping and re-sewing on this one than I'd care to admit. The finished product was a medallion quilt with a creme border and a green batik back. 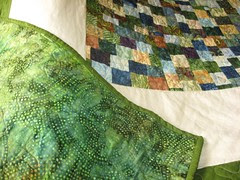 I quilted both of these myself at Olde City Quilts in Burlington, NJ over a series of days in a meandering pattern. I unveiled the quilts before leaving England. 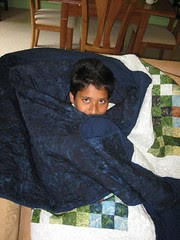