It has finally arrived, the first day of Fall.  While I love this season, it also marks the coming of darkness soon it will be dark both when I go to work and when I depart (most depressing).  As I say "farewell" to summer, here are some updates on some of the projects I worked on this summer. ~ksp

------
Ishbel Shawl - Frogged
As I mentioned earlier here, I either dropped a stitch or created an other yo while plowing through this small scarf in June.  Soon thereafter, summer settled in and it was almost the most hot/humid one on record. I couldn't stand to be near wool, in any form...it was that unbearable.  So, I put Ishbel down.  Now as fall is settling in (officially arriving later this week) and I picked it back up, I have no idea what in the hell I was doing.  So to the frog pond she goes. Alas, I will cast on again on especially since I need to start stockpiling Christmas gifts.

Heirloom Tomato Salsa - Repurposed
I used a water-bath approved recipe for this salsa that called for vinegar found here.  The proportions of tomato to vinegar was over powering as a salsa.  I opened all the cans and threw them into the crackpot for a day and a haf.  I pulsed them down with the immersion blender to a chunky consistency and added sugar and salt.  Not sure of the acid level (I've lost my food grade ph slips) I pressure canned the Heirloom catsup in small jars.  I'll give updates once it's cooled and refrigerated. 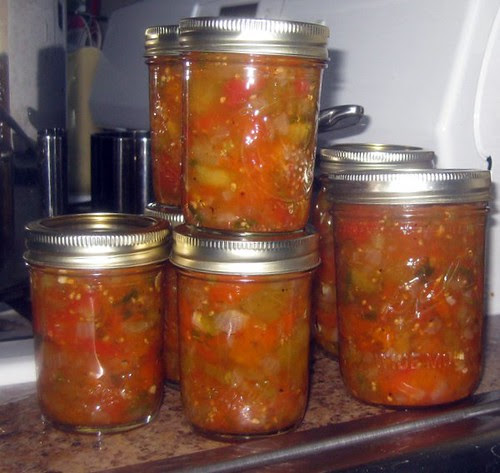 Sunshine Pickles - Failure
I searched high and low for sunshine pickle recipes.  I not-so-secretly love pickles of all kinds.  Once I found the hermetic jars here it was game-on.

After researching recipes I settled on what what I thought would do the trick.  I marked off the requisite days on the calendar and waited.  When I finally opened the jar the pickles had a great aroma and color but a horrid consistency.  They had become a mushy shell of their former selves.  It broke my heart to throw these away, Especially since my homegrown cucumber were not abundant enough to create another bushel.  Next year. 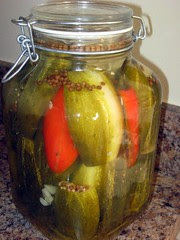 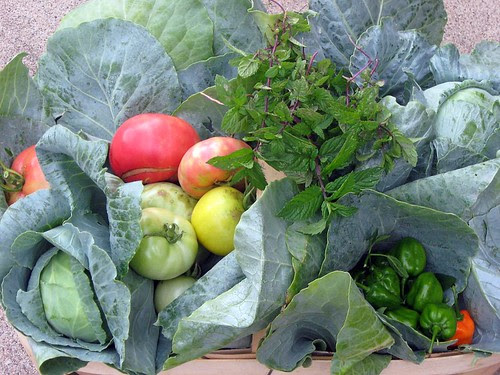 It's thick in the fall canning season and so there's a lot of hurry up and wait, especially as it relates to fall crop (apple, grape, peach, etc) jelly-making. 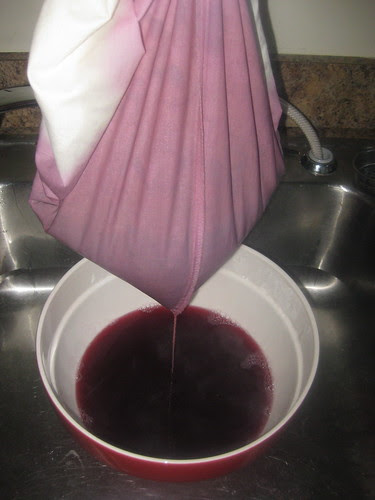 Jelly making requires draining the juice from a pulpy mixture...depending on batch size, this process can take a looooong time.

So while this jelly bag (a retro-fitted pillowcase) drains yummy concord grape pulp, lets have a contest!


In the comments, list your favorite type of jelly and on September 24, 2010, the random number generator will choose a winner. ~ksp
Posted by Kelli at 10:00 AM 2 comments: 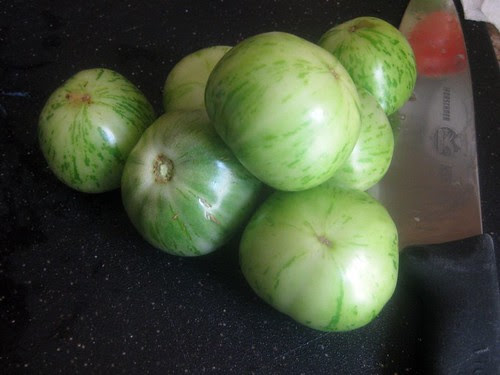 I've recently developed a new blog crush here. I love her juxtaposition of urban living and homesteading. Feels both traditional and hip.

My local farmer's market often has unripe green zebra tomatoes.  It's not a variety I have any interest in growing, but they do make an awesome pickle.  I made minor variations to Tigresses recipe here mostly because I had no fenugreek in the spice cabinet and I used sugar in the raw) and I was not going back to the market.

After letting it drain overnight, I commenced to cooking bright and early the next morning.
After some quick mixing and a hot water bath...pints of yummy pickles to accompany meals throughout the winter. ~ksp 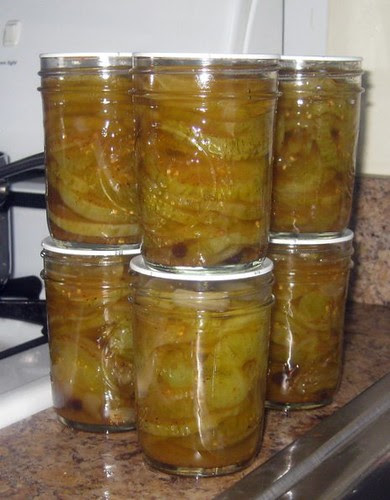 My job required new head shots for all executive staff for our website. Here's mine! ~ksp 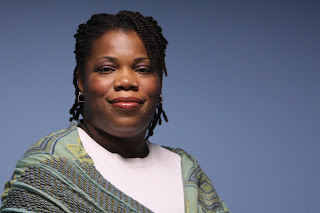 I detest pictures of myself, but since this is going on a website, I am acclimating myself to it.  ~ksp
Posted by Kelli at 12:00 PM 1 comment:

Email ThisBlogThis!Share to TwitterShare to FacebookShare to Pinterest
Labels: photos, self image

Today was a great, albeit busy day.  I had a pick-up of my organic vegetable co-op which included a case of tomatoes for putting up.  It was the first meeting of the season for my quilt guild...and the first day of the New Jersey Sheep and Wool Festival.

Unlike its regional relatives Rhinebeck and MDSW, the NJ festival is quaint with all of the requisite food, animals and local/regional vendors.  I actually loved it.  In recent years, I've gone to the bigger festivals  late on Saturday or Sunday to avoid the throng of the crowd.  I find all of the people distracting from the funtivities.

The drive down to the Hunterdon County Fairgrounds was lovely, the weather hovered around 80 degrees with almost no humidity. I was able to meet blog crush Mistress Rows Red in the flesh and confess my love...I bought some kettle-dyed Romney roving in lovely tone-on-tone aquas.

Here is the last recipe and second place ribbon-winner from this year's fair.  It was a spin on cranberries, and while I am not a fan of cranberry jelly, but this sweet/savory chutney variation hits the spot. The judges seemed to agree.  ~ksp
--- 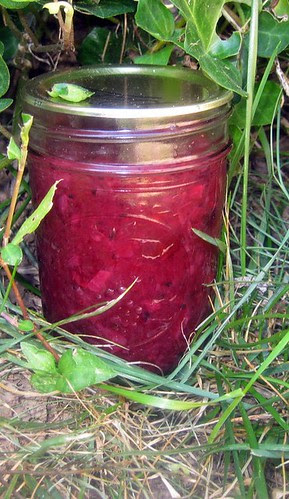 ---
I didn't bother to add food coloring to this recipe, but it easily could be added.   I didn't see the point, it's such a rich golden color by itself. It won an Honorable Mention ribbon at this year's state fair. Enjoy. ~ksp

---
Golden Mint Jelly
Ingredients
Method
1.     Combine apple pieces with water and mint in a large pan. Bring water to a boil then reduce heat and cook 20 minutes, until apples are soft.
2.     Add vinegar, return to boil. Simmer covered, 5 more minutes.
3.     Use a potato masher to mash up the apple pieces to the consistency of thin apple sauce.
4.     Spoon the apple pulp into a muslin cloth (or a couple layers of cheesecloth) or a large, fine mesh sieve, suspended over a large bowl. Leave to strain for several hours. (4 to 5 cups juice).
5.     Measure the juice then pour into a large pot. Add the sugar (7/8 a cup for each cup of juice). Heat gently, stirring to make sure the sugar gets dissolved and doesn't stick to the bottom of the pan and burn.
6.     Add set aside mint and peppers.
7.     Bring to a boil. Cook for 10-15 minutes, using a metal spoon to skim off the surface scum.
8.     Ladle or pour into sterile 1/2 pint jars, filling to within 1/4 inch of the top.
9.     Process in a hot-water bath of simmering water for 10 minutes.  Adjust time for your elevation. 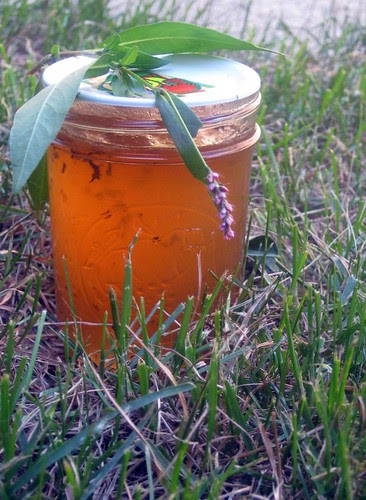 Laboring in the Kitchen

It's Labor Day* here in the US and since I chilled for a lot of the weekend,  I didn't feel bad about working today.  I planted a number of heirloom tomato plants and could not eat them fast enough.  I offered some to my neighbors but still had too many than I knew what to do with.

So as part of my canning spree, I made salsa.  I'm still trying to get better control of my food/portions/sugars etc. so these yummy pints will stock my snack pantry.

As usual, there is a lot going on here.  September marks many beginnings: my quilting guild meetings, winter-league bowling and the enrollment time at work.

On the guild front  I am charged with creating and maintaining the website...I have no expereince with html code so this is yet another learning curve for me...

So now, in anticipation of it all, I will catch up on laundry and get ready for another work week.

Yay for the un-official end of summer!


*Labor Day, the first Monday in September, is a creation of the labor movement and is dedicated to the social and economic achievements of American workers. It constitutes a yearly national tribute to the contributions workers have made to the strength, prosperity, and well-being of our country.
Posted by Kelli at 10:00 AM 2 comments:

I've previously talked here about my quest to cut back the amount of sugar I consume. It is not going well at all. Fighting an addiction, I don't care what your addicted to, is very difficult.  While I do consume less soda and processed drinks, I still can't take mildly sweetened coffee and love pastries....uugghhh...

Alas, I shall soldier on...

In other food related news.  This is the sign that hangs at the urban farm/produce stand that I buy my garden plants and occasionally fruits and vegetables. 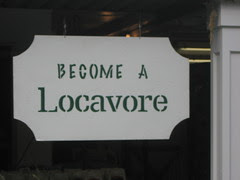 So as I lick my wounds from my epic fail to eat less sugar, I am also focusing on eating simple mostly local foods.

---
My Definitions
Local - Grown or raised within the state of NJ or within a 30 mile radius.  Given I live within 19 miles of NYC and 30 of Sussex County, NJ's farm land, that provides a lot of options.

Simple - Less than 5 ingredients (not including spices).
---
This is a mostly-local meal.  Local eggs thanks to the Montclair Farmer's Market, tomatoes I grew and stewed and store bought brislings. 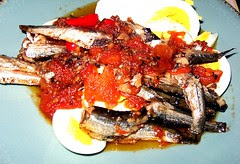 Tasty, healthy simple and local. ~ksp
Posted by Kelli at 6:00 PM No comments: