I became an Auntie again back in February and needed to step up and make Baby A a new quilt.  I loved the idea of using striped reclaimed vintage sheets from several awesome Etsy vendors.
I used my newly minted design board to test out an alternating 5" pattern with blocks of Kona solids

I did an all-around stitch in the ditch using Superior Thread's MonoPoly Polyester and then used a ruler (first time doing ruler work) to quilt an offset diamond pattern onto the quilt.

I then used a navy binding, buried the threads that I could and called it "done". I'll post a finished picture when it is delivered to baby today. ~ksp
Posted by Kelli at 9:00 AM No comments:

Say What You Want to Say 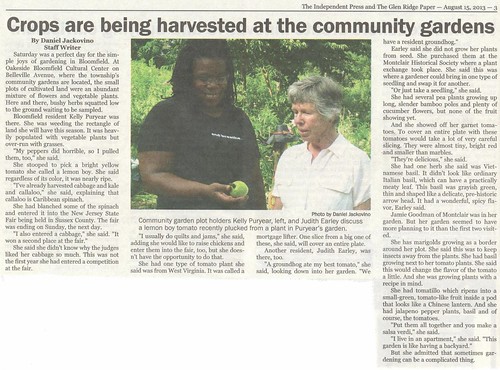 And what's with the reference to the weeds...geez...where's my publicist? ~ksp
Posted by Kelli at 9:00 AM No comments:

Last year one of the last good knit shops in my area is closed up shop.  For several years now, I have not shopped at any shop, but I hated to see a Stix-n-Stitches go.

I swung by there for the Going Out of Business Sale and picked up 7 skeins of yarn to make an ombre sweater...of course it'll be for me...something similar to this Kenzo Basket Weave Sweater
sweater.

You can't tell from this photo but it is a basket weave pattern that transitions the colors dark to light . I hope to put the dark color on the bottom. We will see...I'll be designing the sweater myself.

What a Bear?  You ever think of all of the phrases that use the word "bear"?

My at-work BFF, Michele, was in need of some greenery for her office so I built her a terrarium.  I bought a moss medley from TeresaB123 on Etsy here and a bear figurine from DoodleBirdie. She helps me bear my rough patches at work...it's the least I could do for her. 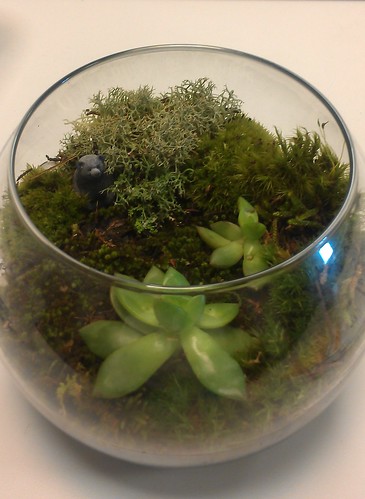 bear arms 1 carry firearms. 2 wear or display a coat of arms.
bear the burden of suffer the consequences of.
bear fruit figurative yield positive results : plans for power-sharing may be about to bear fruit.
bear someone a grudge nurture a feeling of resentment against someone.
bear a hand archaic help in a task or enterprise.
bear someone malice (or ill will) [with negative ] wish someone harm.
bear a resemblance (or similarity) to resemble.
bear a relation (or relationship) to [with negative ] be logically consistent with : the map didn’t seem to bear any relation to the roads.
bear the stamp of be clearly identifiable with : their tactics bear the stamp of Soviet military training. bear witness (or testimony) to testify to : little is left to bear witness to the past greatness of the city. bring pressure to bear on attempt to coerce : they brought pressure to bear on him to resign.
bring to bear 1 muster and use to effect: : she had reservations about how much influence she could bring to bear. 2 aim (a weapon) : bringing his rifle to bear on a distant target.
does not bear thinking about is too terrible to contemplate.


For this reason and because I call her the Momma Bear, I included the figurine.  Turns out that's also her family's nickname for her...I love it when a plan comes together. ~ksp
Posted by Kelli at 6:18 PM 1 comment:

Beautiful...gorgeous heirloom tomatoes. Grown by me... 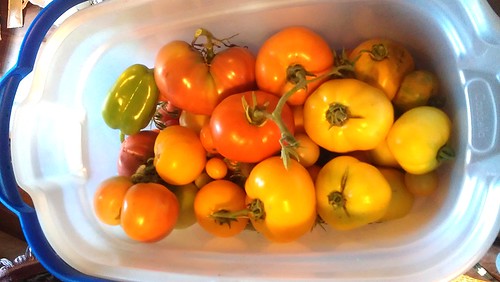 My favorite use for a bucket. ~ksp

In 2002, I went through my cache of patterns and my stash of fabrics and I put together two Block of the Month "clubs".  This one is for my brother.

In true "my life is too busy" fashion, they went into a box for several months having been pushed to the back burner. I talked about it here. 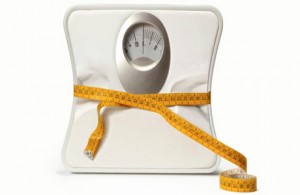 Now I've spoken here at length about my (yarn/fabric, etc) stash diets...this time I am talking about a food diet....

I'm trying to do five meals a day and seriously up my exercise.  I also have set a goal of the Iron Girl mini-triathalon in September...somebody pray for me.  ~ksp

I grew a lot of heirloom tomatoes this year (like every year) and the tomato jewels of my garden are the Mortgage Lifter and the German Green tomatoes...(for slicing and pickling respectively) The Mortgage Lifter is my go-to for summer BLT sandwiches...

Best weeknight summer dinner...EVAH!! ~ksp
Posted by Kelli at 7:00 AM No comments:

It Ain't Easy Being Green

I recently harvested my greens...lawdy do I have a lot of greens.  In this harvest there is:

What a way to spend a Saturday!

Part of my planning for growing all of this cabbage included a plan to make sauerkraut for the first time.  I found and bought a two gallon crock like this one on Craigslist.  Mine came with a lid but no weights.

After pounding the cabbage with the end of my rolling pin I mixed in the spices and transferred it to the crock where it is not sitting, fermenting and funking up the joint.  In a few weeks I will hopefully have some yummy homemade kraut.

Pierogies and sausage anyone? I can hardly wait. ~ksp
Posted by Kelli at 7:00 AM No comments:

How Does Your Garden Grow?

So, I have been gardening this season and it's been a real blast.  There is a local-to-me community garden at Oakeside Bloomfield Cultural Center.  My two-plot nirvana has been a blast to work.  I did some inter-planting, companion planting and succession planting all at the same time (more on all of that later).

Here one of plots at the beginning of June

Here is the other

And again at the beginning of July...can you say "weeds"?

One of my many rows of cabbage...and a fair amount of weeds

A Cabbage Close Up

This year I had particularly great luck with cabbage which is a good thing because I love cabbage in many forms...Think Bubba (from Forrest Gump talking about shrimp...steamed cabbage, boiled cabbage, kimchi, sauerkraut, sauteed cabbage...)

I used bone meal and a slow release organic fertilizer (nothing really special) coupled with some good rains and full sun, I ended up with a bumper crop. I grew lots of other things like tomatoes and potatoes and lots of onions, swiss chard, and even some herbs...

I really enjoy gardening and this was a really good season so far.

Anyone else gardening this summer?
Posted by Kelli at 8:00 AM No comments:

Honoring American military service with the Quilts of Valor....

and American beer.  ~ksp
Posted by Kelli at 6:00 AM No comments:

Happy to be Scrappy

I am working on a quilt potentially to be entered into the 2013 NJ State Fair.  It started out as scraps from another project.

They are wonky Shoo Fly blocks a la Gwen Marston in Librated Qultmaking II.  There is a tutorial here.  I'm playing around with the layout.  Here are some options:

or
Any thoughts or suggestions? ~ksp
Posted by Kelli at 8:00 AM 4 comments:

To My Friends With Opinions..

I dunno why I ask my friend's for their opinions about my impending shoe purchases...we have such differing opinions. Case in point...the following shoes purchases were knocked down one-by-one.

I love cute shoes, but I also need function and comfort.  I spend a lot of time on my feet so comfort cannot be compromised.  The first candidate up is the Nine West Lauford seen here.

The second pair are (seen here) are Naturalizer Enchant

Here they are on me (pardon craptastic camera phone photo on the funky angle).

I get compliments every time I wear them...~ksp

Work got real busy and the weeds at my Oakeside community garden plots got way out of hand...I mean WAY out if hand. 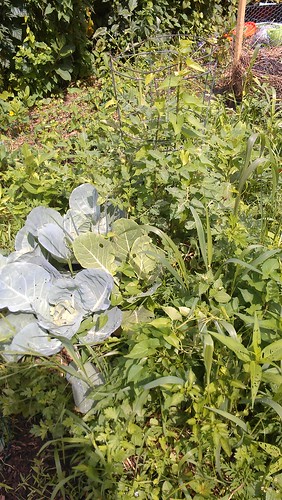 Q: So what's a girl to do?  A: Declare independence from weeds!

You can barely see the edible greens...there's cabbage and collards in foreground of the photo.  There are also peppers and tomatoes and a potato tower in the background.  Help me holy ghost, the strangle vine morning glories choke off everything...and the bugs...oh, the bugs.  I have never seen a more diverse bug population...darn organic gardening!!

I think I need to reconsider my mulch options. The grass that I'm using must have seeds in it, contributing to my weed population. I need to source some local marsh grass, its expensive but it's seedless.

I spent several hours on July 4th weeding.  It was hot as hades with no shade to be found.  But it was great to see the progress (sorry no "after" photo).

Hope everyone enjoyed their fourth. ~ksp
Posted by Kelli at 8:00 AM 1 comment:

The last few months since Superstorm Sandy have been really rough.  Things just haven't been falling like I wanted them to. I've been, at best, off kilter and i have extended more condolences in the last two months, than in the last 2 years combined...just awful.

In the world of competitive sports, when you hit a slump you are encouraged to keep playing. 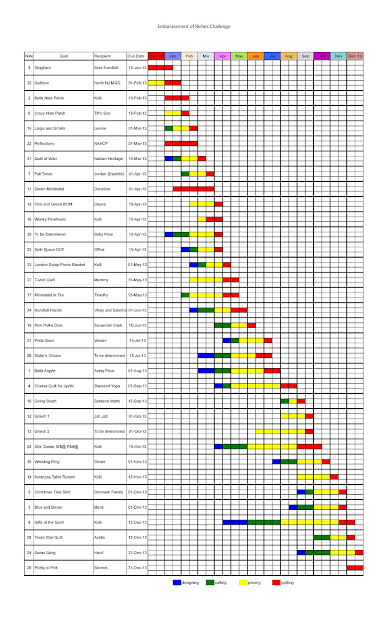 So in the spirit of perseverance I am trying to keep throwing the craft ball.  I have lined up all of my pending quilting projects in a 2013 schedule.  Hopefully, it will challenge, entertain and amuse me.   I'm referring to it as my Embarrassment of Riches Challenge.

Over the next months, I plan to plow through until I get my groove back. I'll keep you posted. ~ksp
Posted by Kelli at 6:00 PM No comments: