Back on the Wagon

As I was heading to Tampa, I was desperate to take a knitting project. Knitting and I have been estranged for some time now. I have not cast on a knitting project in such a long time, I actually had to think about how to cast on...for like 2 whole minutes.

While in-flight (JFK to TPA), I cast on the ever-popular Ishbel by Ysolda. I was looking for a pattern that had the ability to hold my interest, but not so complicated so as to get put into the UFO column. (I'm easing back into knitting regularly.)

Crappy in-flight photo. Had to wind the ball by hand due to poor planning. 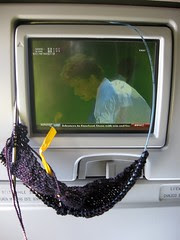 So far it has been a great project to get me back in stride.
I'll keep you posted on progress...or not. ~ksp